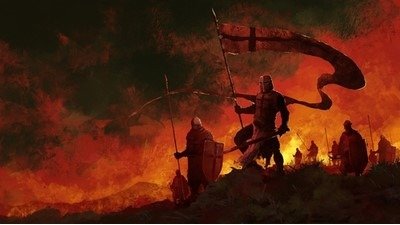 Desert Treasure is a quest in which four guardians must be defeated in order to free Mahjarrat Azzanadra from a pyramid located in the Kharidian Desert.

The first boss is Dessuos and can be found in Mort Myre Swamp. Before fighting him, the player must create an elixir to aid in the battle. Travel to Canafis and enter Hair of the Dog Pub. There will be a cutscene in which you interact with Malak, lord governor of Canafis. After asking about the whereabouts of the blood diamond, he will strike a deal with you: he will provide the location of the diamond but you must slay the monster (Dessuos is another lord who happens to be encroaching on Malak’s territory).

The elixir requires the user locate and combine Runescape items: garlic, silver bar, and spice. After creating a silver bowl, and crushing some garlic, the user must now speak to Malik who will damage the player. This fills the bowl with blood. Before the player can enter Dessuos’ lair, the player must get the blood blessed from the High Priest in Entrana.

Fighting Dessuos: The best approach to taking down Dessuos is through the use of wind spills as this is his weakness. Dessuos can attack with either range, melee or magic and if the player uses protection prayers he will switch his attack so as not to be affected by the prayer. The monster has a combat level of 84. If the user does not bring the bowl or if it is not blessed, Dessuos will continue to revive himself at death. Runes for wind spells and combat equipment can be purchased with RS3 Gold.

Kamil is the next boss that must be defeated in order to receive one of Azzanadra’s diamonds. The Runescape items required to reach Kamil for a fight are a chocolate cake and spiked boots. The player must travel to the northernmost part of Trollheim and from there take the Ice Path further north. You will eventually come across a troll child who is grumpy and requires a chocolate cake to be communicated with. Once he is given the cake, he will tell the user that his parents have been imprisoned for stealing the ice diamond. The user promises to free the child’s parents in exchange for the ice diamond.

After the troll child agrees, the user must pass through a nearby gate and defeat five ice trolls. In this area beyond the gate the cold will constantly sap your stats, so it is highly recommended that the user brings restore potions which can be purchased with RS3 gold, or created using the Herblore skill. After five trolls are defeated, the user can make his way past the trolls unto a path filled with level 95 wolves. The user must run through the group of wolves in order to reach Kamil (it is recommended that the protect from melee prayer be turned on while fighting the trolls and passing the wolves). The path then leads to a flat ice shelf in which Kamil will be encountered.

Fighting Kamil: Fire attacks are the only magic spells which effect Kamil and the most effective attack approach as they deal the most damage, as opposed to melee or range. It is imperative that the player get directly next to Kamil when fighting him as he uses an ice barrage-style attack which can quickly and consistently stun the user. Good Runescape items purchased with Runescape gold are imperative if the user wishes to defeat Kamil.

The next boss that the player will have to face is Fareed. Fareed dwells in the Smoke Dungeon where the user must light torches and unlock a chest in order to enter his chamber. The items required for the Smoke Dungeon are a facemask and a pair of ice gloves. The entrance to the dungeon can be found just southwest of Pollnivneach, around the southern hill. Once inside the dungeon the player must light four torches in order to unlock a chest containing the Warm Key. A comprehensive map of the Smoke Dungeon can be found here.

Fighting Fareed: Water attacks are Fareed’s weakness and are therefore recommended before anything else. Range attacks aren’t recommended against Fareed as normal arrows are incinerated on impact. Fareed has a combat level of 84 and has 20,000 life points. Without ice gloves equipped the user will be unable to wield a weapon (this does not include off hand weapons). It is important to pray protect from melee when fighting Fareed. Good Runescape items are highly recommended.

The fourth and final boss is Damiss who resides in the Shadow Dungeon. The only required Runescape items are plenty of lockpicks (around 100 to be safe) and a Ring of Visibility which is acquired during the quest. Lockpicks can be obtained by using RS3 gold to buy from the Grand Exchange for about 2,000 gp each. In order to fight Damiss, the player must obtain the Ring of Visibility from Rasolo (found west of the Fishing Guild) by locating a gilded cross for him which was stolen by a bandit named Laheeb.

The chest is located in the southern most tent in the Bandit Camp. Three locks must be successfully unlocked before the chest can be opened. If one fails, all locks are reset and the player will be dealt 30 life points of damage with the possibility of being poisoned. After the chest is unlocked and the cross is obtained, bring the item back to Rasolo and you will be given the Ring of Visibility. Now head east where you will find a ladder amongst some picnic tables. This is the entrance to the Shadow Dungeon. A comprehensive map can be found here.

Fighting Damiss: When Damiss’ location is reached he will appear seemingly out of thin air (the Ring of Visibility must be worn at all times within the Shadow Dungeon or the user will be expelled from the dungeon). Damiss has a combat level of 84 and 20,000 life points. Earth spells are the most effective form of attack against Damiss. Earth spells combined with stun spells will keep Damiss at a safe distance which is important because while fighting Damiss the user’s prayer points drops 20 pts every .6 seconds.

After defeating all four bosses the user will have acquired enough diamonds to enter the Jaldraocht Pyramid in the Kharidian Dessert in order to free Mahjarrat Azzanadra from his shackles.