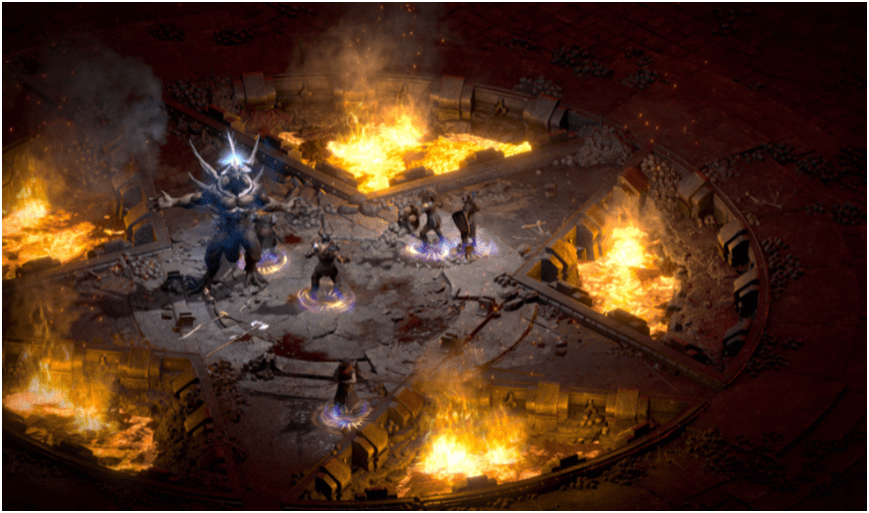 A set of D2R equipment cheap
Helm: peasant crown
+ 20 energy
+ 20 vitality
Wants the energy and vitality it adds, and the other attributes are general.

Wing:
+3 poison and white bone skills. Other additional attributes are optional
The necklace of + skills can be easily obtained through the formula of “3 rings synthesize 1 necklace”

Weapon: Spirit
4 shield
7 + 10 + 9 + 11
Tal + thul + ort + amn
One of the most economical and practical Diablo 2 Resurrected runewords. It has been used from ordinary to hell

Armor: Skin of the vipermag
Skill and 30% FCR are good attributes, and 4R is particularly important in hell.

Gloves: Trang oul’s claws
+ 25% poison wound. It can raise the poison wound by about 1K. Gloves, weapons and clothes are the source of this necromancer FCR.

Belt: thunderpod’s vigor
Is interested in + 20 physical strength, lightning absorption and + electric defense upper limit, which can ensure a certain life safety in front of groups of electric ghosts

The other four defenses and attributes can be made up by several amulets.
Put perfect diamonds in the shield, ral in the clothes, ort in the hat, and then put a + 15 full resistance, + life GC in the prop bar, and a + 11pr, 5% FHR jewels
Complete set of Diablo 2 items, fcr85% to 10F, fhr60% to 7F.

Attribute point allocation:
STR to equipment, DEX to 75% of the grid, and all the rest to the blue necklaces and rings obtained in the game of Vit.
Do not need NPC. 3 rings can be 1 necklace, and 3 necklaces can be synthesized into 1 ring. This method can improve the occurrence rate of + 3 poisonous bone skill necklace,

Set B equipment:
Shield: Trang oul’s wing
Helm: Trang oul’s Guise
Belt: Trang oul’s girth
Other equipment remains unchanged. Four sets are used because you need helm when you replace Raytheon. If you don’t use thunderpod’s vigor
, helm can be replaced with the original peasant crown, and a little poison damage can be increased to about 5K.

Complete set of equipment, fcr85% to 10F, fhr90% to 6F.
Pet equipment:
Pet chooses the offensive type in the second act of nightmare. If you feel unsafe, you can also choose the defensive type.

Helmet: Vampire gaze
Puts an IAS bead. Double suction makes up for the defects of weapons and practical double exemption.

Clothes: shaftstop (WMJ)
Put an IAS bead, the weapon attack speed is 6.5F, and the matching object with vampiregaze is reduced to 50%

Skill point allocation:
Summing:
Raise skeleton: 8 points
All the other

Poisonous bones except Demons:
Three poisons: Max
All the remaining skill points are thrown into the bone wall after meeting other skills.

Curves:
Except for attraction, all 1 points
Recovery investment of 8 points is for the transition period before level 30.

ACT1:
It’s not difficult. When playing sister an, you can regenerate several zombies to attract fire. After losing your old age, you can put a new star outside.

ACT2:
It’s a depressing level. There are many poisons to avoid. You can deepen the damage and promote the corpse explosion. Remember to throw a weak dark look at the fireball wizard. When you encounter Atma’s scarab, lower the resistance and run away immediately after the new star, so as to avoid being electrocuted after a large number of beetles die. When you hit the old capital, you can regenerate a few meat shields and throw a new star outside.

ACT3:
When encountering an electric ghost, the micro spirit amblyopia and the new star are released in turn. After pet hits the corpse, the corpse will explode. There is no poison immunity for the lame. Put a bone wall at the door to attract Hydra bow. The partition wall reduces resistance + Nova + corpse storm. Be careful of the Styx nearby to guard the water monster. Styx dolls are poison free and difficult to deal with. Aging and Corpse Explosion serve. Playing old ink only requires pet and earth magic, aging + CB.

ACT4:
Chaos refuge is dangerous. After taking down pet weapons, you can use regeneration as a meat shield to reduce resistance, Nova and Corpse Explosion. When playing old D, remember to recruit meat shield and pet-equipped weapons. The playing method is the same as that of old mo.

Hit Lao Ni. Remember to use the human flesh bomb that controls it with weak dark vision. A corpse explosion can kill you. After walking around, put the earth devil and aging around it, and rob the body with the skeleton mage and resurrection. The new star had better use less. When pet runs to it, it will be victory.

Poison ice-free mage on the ancient road, weak dark vision + pet.
Hit Sanye, put the city scroll back in front of the altar, and then go to the transfer point of the river of fire to find out if there is an urda beast or the king of caves. The Bush devil next to the Kurast mall in Act 3 is also good. If you think it’s not safe enough, you can recruit a few skeletons to fill up, then go back to the transfer point, go back to act 5, and then enter the magic gate. After they surround Sanye, reduce resistance + Nova to kill one first, and the other two use aging. Be careful of WW killed from the crowd.

On the second floor of the world stone, there is a chance to meet the poison free bone spear snake, which is a big threat. Be careful. The poison free electric ghost in front of the throne is weak + pet.

The first team of the fifth team is a waste wood. Reduce resistance and send it away with a few new stars. The second group relies on reduced resistance and crazy Corpse Explosion. Before the third batch comes down, put the bone wall in front of them, and then reduce the resistance of the partition wall and add the new star. The attractive firepower of the fr + bone wall of 80 can be fought with confidence. Remember that the corpse should not explode, and all the corpses should be resurrected and used. The fourth batch is poison free. It depends on real kung fu. The partition wall is aging + Corpse Explosion. The fifth batch uses bone wall, aging, Corpse Explosion and new star.

Barr is simple. He plays the same way as Lao mo. of course, it’s good to have a few resurrection monsters.